The stable isotope of boron 10B (19.8% natural abundance) readily captures neutrons, while the 11B isotope does not. Biomolecules and drugs containing 10B‐enriched carborane and borane substituents (which preferentially localize in tumor cells and rapidly clear from normal cells) can thus be used for cancer therapy. When the 10B nuclei are bombarded by thermal or epithermal neutrons, they undergo a fission reaction that produces high energy α particles. Since these α particles travel only about 10 µm or less, they selectively destroy cancer cells where the 10B nuclei are localized. This process, schematically depicted below left, is known as boron neutron capture therapy (BNCT). It has been shown to significantly prolong the lifespan of patients with brain tumors; a number of BNCT reagents are currently in Phase I and II clinical trials.

Our research is focused on synthesizing and evaluating as potential agents for BNCT drug delivery cage‐functionalized carbon nanotubes and fullerenes. Also of interest are certain gadolinium complexes currently used as contrast agents and which may have applications in the treatment of brain tumors (such as glioblastoma multiforme, GBM) and other aggressive forms of cancer. Preliminary distribution studies have shown (see Zhu et al., J. Am. Chem. Soc. 2005, 127: 9875; and the figure below) that some of these derivatives preferentially concentrate in tumor cells, indicating that they are useful additions to the arsenal of tumor‐targeting biomolecules such as porphyrin substrates, epidermal growth factors, liposomes, etc., that have been investigated, with varying degrees of success, as BNCT agents. 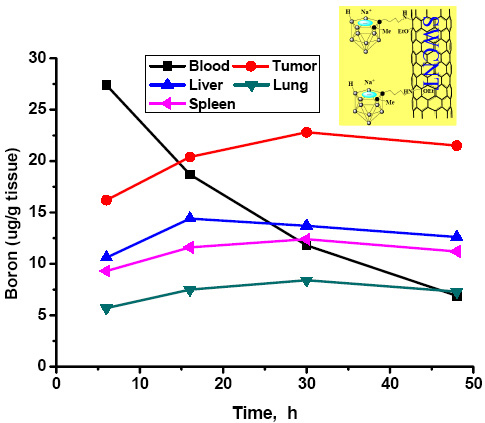 We are also engaged in the synthesis and chemistry of cage compounds composed of boron, carbon, transition, lanthanide and main‐group elements. Examples include carboranes and metallacarboranes containing SiMe3 and/or biofunctionalities and metal–metal bonds. Studies of molecular structure and physical properties are carried out by various crystallographic and spectroscopic methods, electron diffraction, magnetic susceptibility, cyclic voltammetry and other methods. Important aspects of this research are the stepwise construction of a number of half‐ and full‐sandwich metallacarborane species and evaluation of their potential applications as catalysts for Ziegler–Natta olefin polymerization, in selective removal of radioactive metal ions from nuclear waste, as semiconductors or conductors and as precursors to conducting materials.